skip to main | skip to sidebar

One of our favourite pastimes while perusing the menu in a restaurant is checking for typos and other oddities. The most consistent error we find is 'Crown larger', which we like to interpret as a misspelling of 'Grown larger', rather than the name of an overpriced beer.

Today I found in my letterbox a free sample of craisins, with a promotional brochure and recipes. I had never heard of craisins until I visited Boston a couple of years ago, where they popped up in a salad, along with edamame. I was very taken with them and delighted to discover that they could be purchased back home under the more prosaic name of dried cranberries. 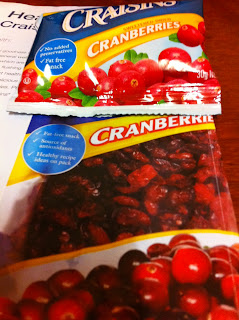 I was very pleased with the free sample and decided to check out more recipes on the craisin people's website. I found a rather appealing recipe for aubergine crostini with cranberry pesto. Among the ingredients of this recipe is '1 large banquette, sliced thinly'. I imagine it's quite difficult to slice up a banquette, but even if it were possible I doubt if it would go with the craisins.
Posted by leonie at 7:33 PM