skip to main | skip to sidebar

The Commun na Feinne hotel ("The Commo") in South Geelong is a popular stopover before, after (and sometimes during) Geelong home games. It has a comfortable bar with an open fire, friendly staff and lots of Geelong memorabilia and is within easy walking distance of the stadium. If you have enough time you can also enjoy a good value meal in the dining room. The vegetarian lasagne with chips, salad and bread was always a favourite, but I notice that along with joining Facebook, the Commo now has eggplant parmigiana on the menu, which can only be a good thing. 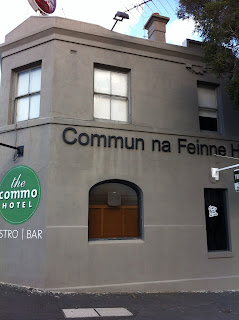 I'd always assumed the name to be Irish, but on undertaking some "research" (ie a Google search) I discovered that Commun na Feinne is actually from the Scots Gaelic. Commun na Feinne was the name of a 19th century Geelong society which flourished around South Geelong. Early versions of the Geelong Highland Gatherings were held in fields east of Bellerine Street where the hotel now stands.